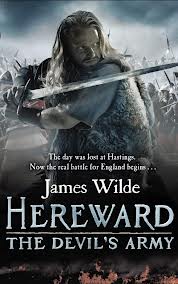 This is an intriguing, fast paced historical adventure featuring a period which I have rarely seen depicted in fiction. The novel covers a short time period after the Norman Conquest when the legendary Hereward rallied the English troops in the Fenlands of East Anglia. William may have taken the crown but Hereward and his army are growing and they feel that victory may be within reach, however the prospect of danger and betrayal are present at every turn. The story is told from multiple viewpoints; Hereward himself, Alric the monk his ally and friend, Balthar the fox an Englishman who supports King William, Turfrida Hereward's wife among others. This is actually the second book in a planned trilogy, I haven't read the first but I had no problem with being thrown into the action from page one. James Wilde is a talented and intelligent storyteller, the relationships and character crafting receive as much attention as the action sequences. I would recommend this book to anyone with an interest in this fascinating historical era. If you are a fan of Historical action adventure such as Giles Kristian or Ben Kane then give this a try.