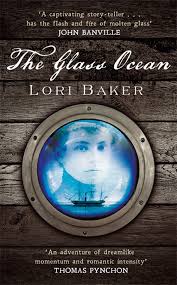 Lori Baker who has won awards for her short stories is set to be a major literary star. Her first novel is a strange and dreamy tale of flame haired six foot two orphan girl Carlotta Dell’Oro. Carlotta’s tale begins as she sets out on a new adventure in a new land. She is the author of her own beginnings of how her parents met and their individual stories. Through her young narrator Lori Baker presents fascinating characters and recreates a Victorian world of stuffed animals, sea voyages, insatiable thirst for knowledge, creaking houses stuffed to the brim with clutter and a marriage of misunderstanding. Carlotta’s parents are thrown together by circumstance and they are distant both from each other and from their child. She grows up neglected and alone in a house full of curiosities from all over the world brought back from her grandfather’s travels and the glass which her father works in a constant search for perfection. This is a beautifully written novel full of loss and longing which can be summed up in Carlotta’s observation “It is interesting …how we always think most about the one who has gone away…and least about the one who has remained…” P.192.

Thanks to Stacey Bartlett of The Bookseller for the opportunity to read and review this title.
Posted by Lisa D, at 12:32 PM