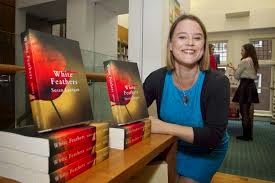 Hello again sorry for the unexpected absence but I have returned with an interview with the lovely Susan Lanigan.

Susan is the author of the amazing White Feathers one of my favourite books this year.

White Feathers is the tale of Eva Downey, neglected daughter of  an Irish family living in London, bright, bookish and stifled she jumps at the chance to attend a school for young ladies in Kent. Here she learns to express herself, makes friends with the charming Sybil and finds a kindred spirit in teacher Christopher Shandlin. However Christopher is a conscientious objector and using the threat of not sending her beloved sister Grace for life saving medical treatment, Eva's family bully her into presenting him with a white feather, the symbol of cowardice. Eva is devastated and throws herself into war work. The impact of the white feather resounds through the years affecting Christopher, Eva and their families. This is a wonderful novel of love, war, family and duty and for me was one of the outstanding debuts of the year. I cannot wait to see what Susan will write next. If you haven't picked this book up yet then get it for Christmas for yourself or a friend and read it you won't be disappointed.


1. Do you plan your work in detail and then research or does your research spark and inform your ideas?

I tend to use the real events the way Tarzan uses ropes to swing from tree to tree – the real event being the next tree and my story being the ropes between. This is especially helpful in first drafts where the plot is coming into shape. For the first draft of White Feathers, I did a month of research and jotted down some notes, but it was hard to know exactly where I was going until I wrote it, and during that draft, the direction changed. There was a character who was only supposed to have one scene but he came in and utterly stole the show, and my heart, so he became a protagonist.

The real events stayed as absolutes. You can’t just move the battle of Loos…though I’m sure the many people who were butchered in that pointless caper would wish otherwise.

2. Do you think historical fiction is enjoying a resurgence and why is that?

At the most basic level – this would be my guess – historical fiction often focuses around dramatic events. This means that things happen, which is good for plot! The greater power struggles also provide a magnifying glass for the meaner, smaller ordinary abuses of power that take place. White Feathers is organised around an individual act of emotional violence that is perpetrated in the wake of a massive historical event, World War I. Everything is on a bigger scale, more dramatic.


3.What draws you to writing about the past?

I write about the past so that I can write aslant about the present. In one part of the book I have a character, Lucia, urging Eva, the protagonist, to “sing it straight” – that’s an operatic term which means without adornment or affectation.

Also the more I got into the characters’ minds, the more irritated I became with the idea that “we in the present” know so much better. What nonsense. These people are intelligent! They know what’s going on.

I have my characters battle emotional and physical violence because I see how power works, then and now. Although I am not writing about Ireland, the cruelty we Irish have inflicted on our own who in any way “let the side down”, or were different, kindles rage in my heart. Anger fires me. Love may light a candle in the darkness, but anger will plug you into the entire National Grid.

4. Do you have a typical writing day?

I never work in the mornings, mostly because all through drafts 1-4 of White Feathers, I had a job and all my energy was focused on getting out the door on time. The fifth draft was done with my editor and I took time out of the workplace for that.

I do everything from Dropbox so it won’t get lost. There is always a ritual to Opening the File. The time between my sitting down to write and Opening the File can be a good half an hour. This is not the fault of Dropbox.

I never work in silence. I always, always, listen to music. Characters have songs. Events have songs. I’m a very aural person.

5. What are you working on now?

Two stories are fighting each other: one is about the Sudetenland and a dangerous romance. The first draft is three quarters done. However a particular individual in White Feathers very much wants her own story and is staking her claim. She is a demanding but charming muse, and difficult to resist.
#ReadWomen2014 Debut Historical Fiction O'Brien Press Susan Lanigan WW1