The Escape by Clare Harvey Blog Tour and Q&A 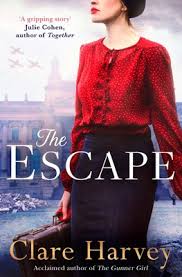 The Escape is Clare Harvey's fourth book and features a dual timeline with a young German woman; Detta in 1945 as the Russian tanks and the red army begin to march from the east and a young English woman; Miranda in 1989 who is working as a photographer as the Berlin Wall comes down. I loved the parallels that the author drew between the two women both caught up in the huge events of history and both desperate to escape their own personal situations. Miranda is desperate to leave an abusive relationship while Detta helps a British prisoner of war and risks her own safety. This was an utterly riveting page turner, which I finished in just two or three sittings. The author brilliantly captures the atmosphere and intensity of both time periods. This was the first Clare Harvey novel I have read but it won't be the last as I'm eager to now read her previous books. Clare kindly answered a few questions I asked her about her research and writing methods.

Q1. Some of your previous books have been inspired by real people and events. Tell me about the research for The Escape, was it a different or similar experience to researching previous books?

I had to do a lot more research for The Escape than for my previous novels, because it’s a two-timeline book, so there was double the amount of information to digest before launching myself into the creative process. It also involved two research trips, to Poland and Germany.
For the WW2 storyline I needed to find a small village in what used to be Germany, which was overrun by the Russian Red Army in the winter of 1945. The Escape is inspired by a true story of a young German woman who falls in love with an escaping British POW. The research trip took place in February, and was very, very cold, and not at all as glamorous as you’d expect a foreign research trip to be. However, I did discover the site of where I knew two young people had fallen in love, and escaped to freedom together, some seventy-five years ago, and I gleaned lots of vital information for the book. Then, after I’d written the bulk of the 1945 storyline, I visited Berlin to research the 1989 timeline, which takes place just as the Berlin Wall is broached and the Eastern Bloc begins to crumble.
For me it’s really important to do my so-called ‘optical research’ on each location, as well as reading lots of non-fiction books about the era. Finding out about WW2 and the Cold War, from a German perspective as well as a British one, was absolutely fascinating – sometimes it’s a wrench to end the research process and actually begin writing!


Q2. What draws you to writing about WW2 and in particular women and their experience of war?

I initially fell into writing about wartime when I discovered that my mother-in-law had served in the British Army in WW2, and that revelation planted the seed that eventually became my debut novel, The Gunner Girl. I think the experience of researching and writing The Gunner Girl made me fall in love a little with the era, not least because it was a time where women – out of necessity due to men of fighting age being called up - really began to break free of the bounds of domesticity. For example my second book, The English Agent, I write about a Secret Operations Executive (SOE) agent who is parachuted in behind enemy lines in Occupied France (there’s been a big palaver recently about women being able to join the British Special Forces, but women took on just those sort of roles in WW2, albeit in a voluntary capacity). In my book, The Night Raid, I write about a real-life war artist, Laura Knight – again, a woman working in a male dominated arena.
Someone recently described my books as ‘quietly feminist’, which I take as a real compliment – I like to think my books portray strong women who feel real to the reader, and deal with the challenges and chaos of wartime in a believable way.


Q3. Who are your favourite authors of historical fiction? and why?

I always say Kate Atkinson, because I think she’s an incredible writer, who manages to write books that are brilliantly plotted, intelligent, poignant and witty. My favourite is Life After Life, but I love all of her books.
I think Elizabeth Jane Howard and Mary Wesley both wrote brilliantly about WW2, too. Not only were they both wonderful writers, theythey were drawing on their own experiences as young women in wartime, which means their work has a wonderful feeling of authenticity.
I also love reading fiction from the 1930s and 1940s that would have been contemporary. Last summer I read all of Dorothy Whipple’s novels (she’s overlooked these days, but was a bestseller in the mid twentieth century), which I blogged about for the Nottingham UNESCO City of Literature site: https://nottinghamcityofliterature.com/blog/my-summer-with-dorothy
And at the moment I’m rediscovering Elizabeth Bowen’s short stories from WW2.


Q4. If you could have a dinner party with some extraordinary women from the past, who would you choose and why?

I would have to choose some of the real women who have appeared in my books, just to see what they think of their fictitious portrayal. From The Gunner Girl it would be Mary Churchill (Winston Churchill’s daughter), who served as a soldier on the anti-aircraft guns in Hyde Park. From The English Agent I’d have the formidable Vera Atkins, who was the SOE’s agent handler for operatives dropped behind enemy lines in France. From The Night Raid I’d have Dame Laura Knight, the charismatic and enormously talented war artist who famously painted the Nuremburg Trials. And from The Escape, I’d choose a minor character, Mariya Oktyabrskaya, a female tank commander in the Russian Red Army.
What a dinner party that would be – I’m sure the wine would flow, and I wouldn’t get a word in!


Q5. Any words of wisdom for those who would like to write historical fiction?

As I feel I’m still learning the craft myself, I’m afraid I can’t offer many wise words, except to do as much research as you can, especially visiting the locations you’re writing about. All the tiny details you pick up through the process will feed into your work, and help make your story feel real for your readers.

Thanks so much to Clare and to Jess at Simon and Schuster for sending me a copy of the book.
The Escape is out now in paperback.