Blog Tour for The Long Fall by Julia Crouch 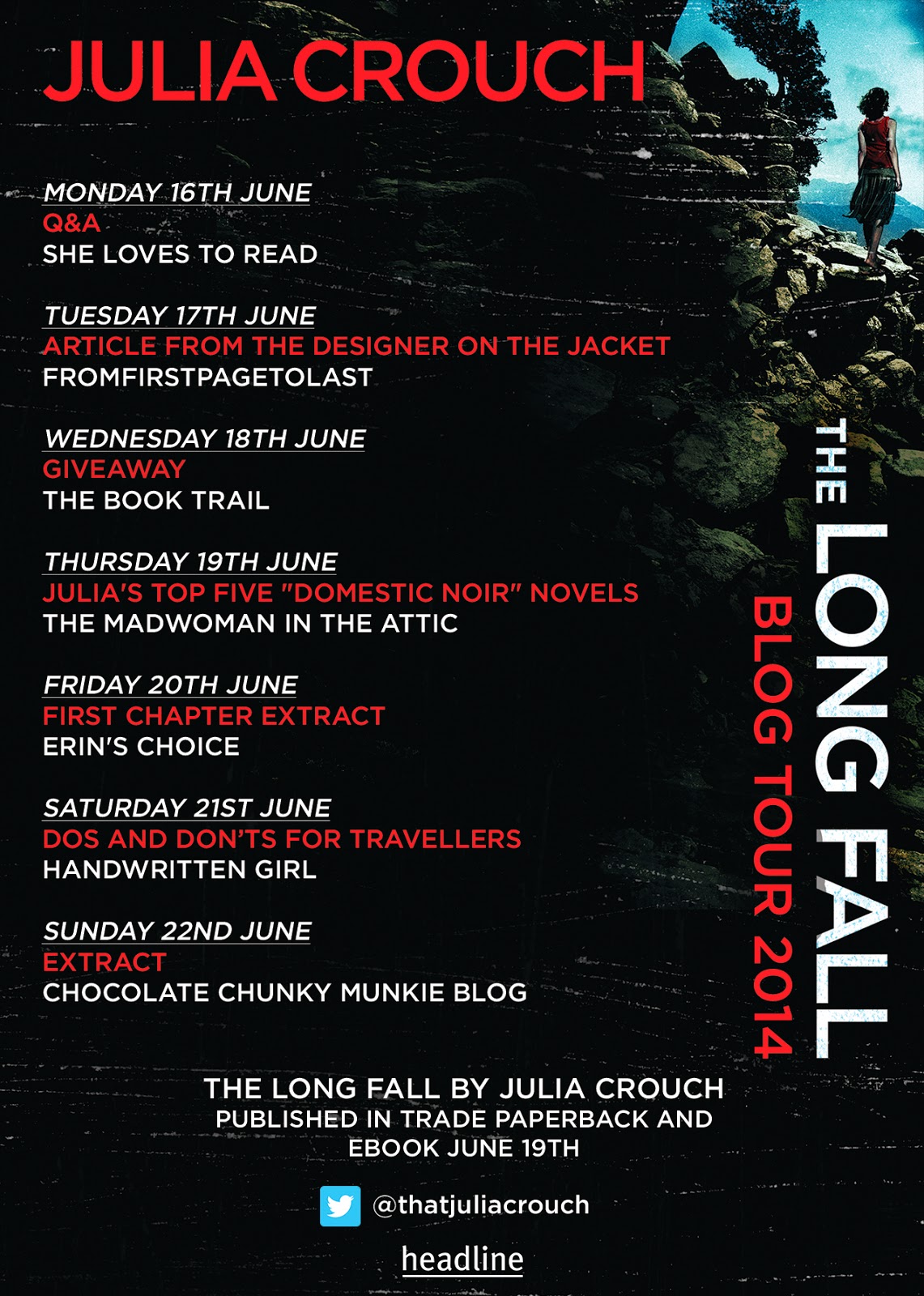 Today I am delighted to be taking part in the blog tour for Julia Crouch's latest novel which is published today in TPB and e-book. Get you hands on a copy now. Julia writes thrilling creepy stories about trust and relationships that are simply unputdownable. Follow her on twitter @thatjuliacrouch. Thanks so much to Elizabeth Masters at Headline and Bookbridgr for the chance to take part. I will be reviewing this book later today so stay tuned.

I asked Julia about her favourite "domestic noir" novels and she sent the most amazing reply (see below), so get ready to add oddles of books to your wish list.

This task has been both completely enjoyable and utterly impossible. Just five? Give me a break.

Looking back over my crammed bookshelves – like most writers, I have more books than available walls – I realised that almost every single book I have loved, whatever the publisher’s classification, could fit into my definition of Domestic Noir.

Domestic Noir is about the things people do to each other in the name of love. It’s about the levels at which we can deceive ourselves and others, and how we manage to live with our secrets. It can include police and murders, but that’s certainly not essential. The mystery lies in the why- rather than the whodunnit.

So, for example, I could include Wuthering Heights, one of my all time favourite novels. But I’m not going to, because a) there are another five that I’d put in front of that now and b) I may have read it about ten times, but that was in my teens and twenties, so it’s not so terribly fresh in my mind.

Also missing from this list are any Barbara Vine books, simply because to choose one favourite is like choosing your favourite child. It’s simply not on. However, flicking through my well-thumbed copies, I realise how formative her writing has been for me – subconsciously I have picked up some very similar themes in my own work.

Another more controversial contender was Ian McEwan. I love his work, particularly his early novels such as The Comfort of Strangers, A Child in Time and The Cement Garden – they are dark, about the outer limits of relationships and sexuality, and explore love and loss. I often wonder, if he were to start writing today, how a publisher would sell him – would he be on the New Blood panel at Harrogate, for example?

Anyway. Enough about what isn’t on the list. Here’s what is, in no particular order.

Rebecca by Daphne du Maurier
I love the first person narration, the fact that we only see events through the eyes of the nameless second Mrs de Winter, so, although we learn early on not to completely trust her world view, we are still surprised at how events unfold. There are great set pieces too – the drama of the burning house, the mystery and the placing of the action set up by the first line: Last night I dreamt I went to Manderley again... and the sea salted, foggy atmosphere that permeates the book.

The Good Soldier by Ford Madox Ford
I adapted this for the stage many years ago, so it is really quite intimately in my blood. Again, we’re dealing with an unreliable narrator, and again with a famous, scene setting first line: This is the saddest story I have ever heard. If you haven’t
read it, do. It’s like a quadrille: four people dancing around each other, changing partners, looking for happiness and love, and failing catastrophically.

Something might Happen by Julie Myerson
I love Julie Myerson’s work. It was reading this particular book that made me want to write. I particularly admire the sparseness of her writing, and the way in which she manages even so to capture so much domestic detail. This is the story of the brutal murder of a woman in a Suffolk seaside town, and the effect it has on her closest friends. As Alfred Hickling put it in The Guardian: ‘while we are offered the paraphernalia of detective inspectors, sniffer dogs and bereavement counsellors, the reassuring certainty of conventional crime fiction is disturbingly absent.’ It is cruel, unflinching, yet also compassionate.

The Poison Tree by Erin Kelly
Erin is such a fantastic writer and I love all of her books. I had to choose just one, and it was really hard, but The Poison Tree is so dark and mysterious, so witty and so lusciously written, that it had to be the one. Also, it came out about the same time as my own first novel, Cuckoo. I didn’t know Erin at the time, but we are now good friends and have often remarked how close the worlds of our books are. Erin’s Biba and my Polly could even be sisters under the skin. It’s often why we love particular books, isn’t it? Because we just get what the writer is doing.

We Need to Talk about Kevin by Lionel Shriver
Such a chilling story, so brilliantly told. Because of the structure, where Eva is trying to work out things for herself, the reader is constantly asking questions – What happened? What’s going to happen? Who did it? Why? Like all the books on my list, Kevin offers no easy answers. It’s up to the reader to do a bit of work as well.

So, that’s the five.

But hold on. What about Before I go to Sleep by SJ Watson? Or Room by Emma Donoghue? Or Tideline by Penny Hancock? Or Gone Girl by Gillian Flynn? or…

Oh no. Have I got to start all over again?

So what you think of Julia's selection? Which have you read? Which are you hoping to get your hands on? I have only read two on this list The Poison Tree and Rebecca both of which are fantastic dark and thrilling reads. I will be looking out for the other three as soon as possible.

Thanks so much Julia for coming up with this great list.