The London Monster by Donna Scott 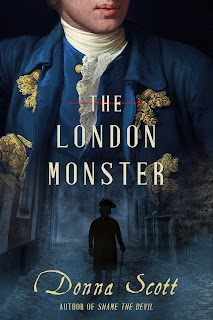 A dangerous assailant with a knife is stalking the streets of London, targeting; women slashing and stabbing, but this not Jack the Ripper, it is another notorious real-life criminal The London Monster.
The second novel from Donna Scott is set in London in 1789 and features aspiring writer Sophie and amateur boxer Tom. Both are from respectable backgrounds and must keep their activities secret from their families. Sophie sneaks around dressed as a man, visiting brothels and watching boxing matches hoping for the kind of story that will get the papers to accept her (albeit with a male pseudonym). Tom also boxes under a false name. He doesn't want to cause the kind of scandal that would impact his father's political career. The two meet and it doesn't take long for Tom to see through Sophie's disguise. They also have a mutual friend; Maeve a prostitute struggling to make enough money to pay for her child's upkeep and medicine. Tom is determined to track down the brutal 'London Monster' who has been attacking women in London; slashing their clothes and getting increasingly violent. As Sophie struggles with the confines of her engagement and her desire for freedom and Tom struggles to keep his identity hidden as he grows increasingly successful in the ring, the pair find their two world's colliding as The London Monster is finally unmasked. Or his he? This is a fantastic historical mystery which fans of Donna Scott's previous novel will enjoy. It will also appeal to fans of E. S. Thomson and Antonia Hodgson.
Thanks to the Coffee Pot Book club for the chance to host this stop on the blog tour.
Buy this book here Amazon UK
18th Century Blog Tour Coffee Pot Book Club Historical Crime