Kid; A History of the Future by Sebastian de Souza Blog Tour 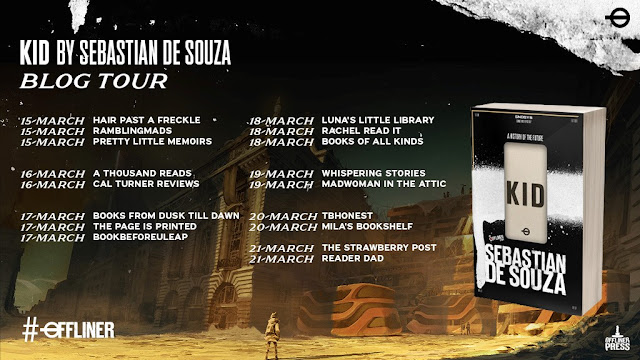 I am thrilled to be involved in the Blog Tour for Kid: A History of the Future; the first YA novel from actor, screenwriter and now, novelist Sebastian de Souza. This is a compelling and fast paced thriller set in 2078 as Joshua (Kid) Jones discovers that he can somehow communicate with the past. The world Kid lives in has been destroyed by pollution, several global pandemics and cataclysmic weather changes. Almost everyone lives in the online world, plugged in to the grid, their lives regulated and monitored by GNOSYS. But Josh lives in the Ghetto, he is an Offliner living in what used to be the Picadilly Circus Tube station. Their community is self sufficient but struggling and GNOSYS wants them out.

Kid is searching through the few things that his parents left him including an old i-phone; an antiquated piece of technology that once belonged to his Grandmother. He manages to send a message and is shocked when a 16 year old called Izzy replies but it soon becomes clear that Izzy is living just up the road in North London, but in 2021, during the first wave of the pandemics; the corona virus. Somehow Kid knows that he needs to ask Izzy for help, to stop the destruction, the devastation that is coming to London and to the World. Before it's too late.

Kid: A History of the Future is a powerful novel about activism, climate change and the danger of over-reliance on the online world. It's about being young and feeling powerless and also about standing up for what you believe in.  The first in a powerful new trilogy from a writer of immense talent.

Thanks to Midas PR for the chance to be involved. Kid: A History of the Future is on sale now.