The Fountains of Silence by Ruta Sepetys Blog Tour 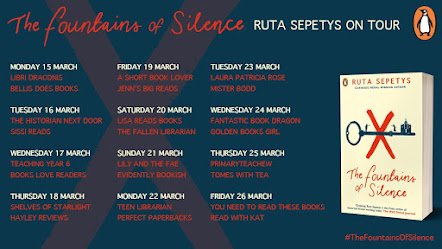 Ruta Sepetys is a world wide bestselling novelist. She writes  YA historical fiction which has broad crossover appeal. She has won and been shortlisted for a number of prizes, including the Carnegie Medal and her work is regularly used in classrooms to teach Young Adults about history and in particular the areas of historical that are often glossed over or barely spoken about. To date her books have focused on twentieth century history and featured stories of young people; including characters surviving under the Soviet regime, refugees fleeing war torn Europe and a gorgeous coming of age tale set in 1950s New Orleans.

Her latest novel The Fountains of Silence is set in 1950s Spain under the terrifying facist regime of General Franco. In the 1950s, Spain had just begun to open its door to American tourists and American business interests, The book focuses once again on the experiences of young adults; including American Daniel Matheson a young photographer, and Ana a young Spanish hotel maid, whose family has been engulfed by the horrific violence of the fascist state.

While Ruta has drawn on some of her own family history for her previous novels with The Fountain of Silence she spent seven years exploring the landscape, people and history of Spain in order to ensure the authenticity of the setting and the story. Her work is detailed and descriptive but she has put just as much effort into crafting compelling and believable characters and a genuine page turning story.

Ruta uses excerpts from newspapers, magazines, official documents, telegrams and various other sources that she discovered during her research and this has added a richness and texture to the story, reminding us that although the characters are fictional, the world they lived in was very real.

Silence is explored throughout the book and is a topic that the author has explored in previous work. Sepetys conveys a balanced examination of the era and the differing interpretations of events, showing us how silence can causes fear, anger and uncertainty. Spain's history is brought brutally and brilliantly alive in this authors hands. Sepetys has been outspoken in her view that Young Adults are often the best readers due to their passion and integrity and her audience have been gifted a gem in this tale exploring a hidden and underrepresented part of Europe and America's heritage.

Thanks to Ruta and to Nina for allowing me to be part of this blog tour.

The paperback of The Fountains of Silence is now available form Penguin Random House.