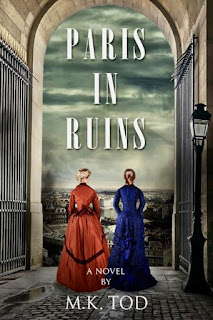 M.K. Tod's latest novel looks not at Paris during the revolution, nor during World War Two, instead it's subject is Paris during the Franco Prussian war of 1870, a period that is often overlooked in fiction and yet a period of striking change, upheaval and devastation. Camille and Mariele come from privileged backgrounds and have been raised in preparation for balls, dresses and marriage but in a city under siege they must do what they can to aid the people of Paris. Camille may seem frivolous and flirtatious on the outside but she has an appetite for politics and agrees to spy on a group of radicals, relishing the chance to escape into the city's back streets unchaperoned and play the part of a radical herself.

While Mariele develops from soft hearted to practical and capable. Both young women face challenges and hardship and volunteer to help in whatever way they can Camille as a nurse, Mariele working with young children, as they face food shortages, illness, suspicion and the ravages of war. They are forever changed by their experiences. Tod has clearly done some excellent research. The realities of life in a city under siege are brilliantly drawn.

This novel will appeal to anyone with an interest in historical fiction but in particular I think to fans of Tasha Alexander, Susanna Kearsley or Tracy Chevalier.

Thanks to Amy of Historical Fiction Virtual Book Tours for the chance to read an early copy of the book.

The blog tour continues, details below 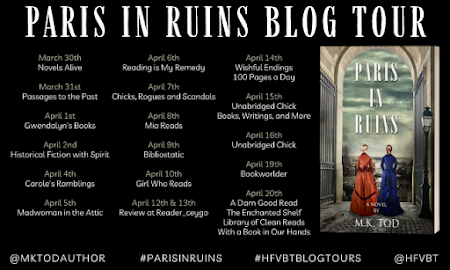