Ash Mistry and the Savage Fortress

Ash Mistry and the Savage Fortress 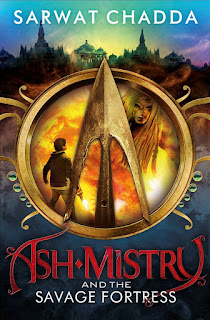 Ash Mistry and the Savage Fortress is a fantastic action packed read for teens. If you have enjoyed Percy Jackson, Darren Shan and Skulduggery Pleasant then this book is for you.  Sarwat Chadda’s new book is steeped in Indian legend with a hero torn between the high tech of his everyday life and the ancient land of snake charmers, gurus and demon legends of his ancestors. In case you didn’t know Demons are in and there are no darker demons then those of Indian mythology. Ash is an unlikely hero; plump, nerdy and a little bit lazy but when his family are endangered he has to step up and learn how to fight and when he discovers an ancient Indian artefact he realises that he his stronger then he thought. I really enjoyed this and hopefully it will be the first in a series. It’s bound to excite the interest of readers aged 10+ especially as Asian mythology has rarely if ever been featured in books for this age group before and it offers an exciting new area for the author to explore.  I am a huge fan of mythology and I knew nothing about Indian mythology before I picked this up so it's been a great introduction. I look forward to reading more from this author. 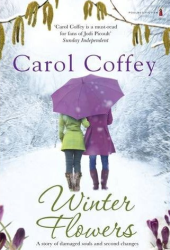 Winter Flowers is Carol Coffey’s third novel and I believe it is her best to date. It is the story of two sisters who have both been wounded by life. Iris has always taken care of her younger sister and Hazel has always let her, but they must both learn to heal the wounds of the past just as they must confront the dangers of the present. Hazel also has two young sons caught up in a dysfunctional lifestyle and the two sisters realise that is time to stop the cycle of damaged childhood.

When Hazel discovers some of her mother’s letters in the attic some long held family secrets are revealed. Gradually the story of the past and the present unfold and the sister’s stories are given alternate chapters.

Carol Coffey has often been compared to Jodi Picoult and I can understand why; like Jodi Picoult Carol deals with “issues” such as alcoholism, depression and violence. However what Carol excels at, is in creating utterly believable characters that the reader cannot help but care about and in detailing the nuances of character and family relationships with faultless writing. In that I believe Carol Coffey deserves comparison with the Queen of Women’s Fiction; Maeve Binchy.
Posted by Lisa D, at 1:21 PM No comments: Links to this post

Earwig and the Witch By Diana Wynne Jones

Earwig and the Witch is the final book by Diana Wynne Jones who after a long and prolific career lost her battle with cancer in March this year. Diana was one of the worlds best loved Children’s authors creator of such classic tales as Howl’s Moving Castle and Charmed Life. She has been a huge influence on the current generation of Fantasy writers and will undoubtedly continue to enthral and inspire for generations to come.

Earwig and the Witch is aimed at younger readers and will hold six and seven year olds spellbound. Boys and girls will delight in the unexpected storyline and entrancing illustrations by Marion Lindsay which match the tale superbly. It is most likely to appeal to fans of Horrid Henry or Clarice Bean as Earwig is a cheeky, bossy but utterly lovable heroine who manages to charm all around her even demons and witches.
Posted by Lisa D, at 1:19 PM No comments: Links to this post

Ruby Redfort: Look Into My Eyes By Lauren Child

Ruby Redfort will already be familiar to Lauren Child fans as she is the fictional heroine of a series of books beloved of Clarice Bean, star of Lauren’s wonderful series for younger readers. Now Lauren has given Ruby her own series and aimed the books at the 9-12 age group who having adored Clarice will undoubtedly take Ruby to their hearts also. Ruby like many of Lauren Child’s characters is larger than life yet utterly believable. She is a genius code cracker with a nose for mysteries making her the perfect candidate to be recruited as a spy. Together with her close friend Clancy and her ever present butler or should that be “household manager” Ruby manages to solve the puzzles and save the day. Lauren consulted with a maths professor to create unique puzzles to challenge readers and hopefully instil and encourage an appreciation for maths.  The book is a fast paced thrill ride with a retro feel reminiscent of Nancy Drew of the Hardy Boys but bursting with Lauren Child’s trademark wit.
Posted by Lisa D, at 1:01 PM No comments: Links to this post