Showing posts from April, 2019
Show all

The Daughters of Ironbridge by Mollie Walton blog tour 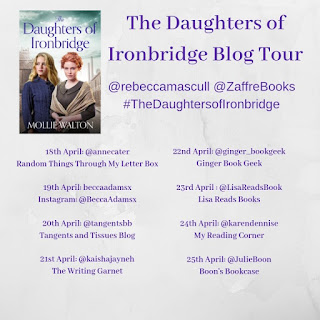 I am thrilled to be taking part in the blog tour for Mollie Walton's first book in the Ironbridge series; The Daughters of Ironbridge. Mollie is already an established author of historical fiction as Rebecca Mascull and has turned her talent to writing saga with great success. I grew up reading historical saga and The Daughters of Ironbridge is an outstanding book that will I hope gain many more readers for both the genre and for Mollie/Rebecca in either writing guise. The story focuses on two young women who come from different worlds; Margaret is the sheltered and shy daughter of the wealthy King family. The Kings own the Ironworks which employs the majority of local men including Anny's father. Anny and Margaret meet when Anny is given a job as a messenger for the works office. The girls become great friends though they must keep that friendship a secret as it wouldn't be approved of for a young upper class lady to associate with an Ironworker's daughter. While Ann…
Post a Comment
Read more

The Killer in Me by Olivia Kiernan 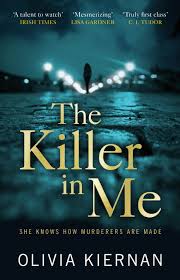 The Killer in Me is the second book from Olivia Kiernan, once again featuring Dublin detective Frankie Sheehan. Frankie's sister in law has asked for help in reviewing the case of a young man who served a seventeen year sentence for murdering his parents. Looking over the case Frankie thinks that shortcuts were made to ensure a conviction, but her focus is on a current murder case when a man and woman are found dead at the church near her old family home. The case is a baffling one but soon the connections with the older case become apparent and Frankie is in a race against time to prevent the next killing. Olivia Kiernan's knowledge of Dublin's streets, habits and language shines through in her writing, bringing the darkness that lurks just under the surface out into the light. The Frankie Sheehan series is perfect for fans of Tana French, Liz Nugent, Dervla McTiernan and Jo Spain. The Killer in Me is published by Quercus in hardback and e book on April 4th.
Post a Comment
Read more
More posts